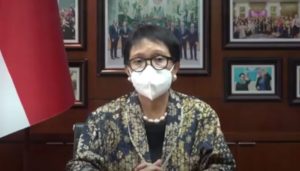 The Government continues to secure COVID-19 vaccine supplies for the national vaccination drive.

As many as 450,000 doses of AstraZeneca vaccine from the Dutch Government obtained through bilateral cooperation and 1.56 million doses of Pfizer vaccine acquired through commerce, Thursday (19/08), arrived in Indonesia.

“Tonight we received 450,000 doses of AstraZeneca vaccine, which is a dose-sharing from the Dutch Government. The arrival of AstraZeneca vaccine is the first shipment batch of the Dutch Government’s commitment to provide 3 million doses of vaccine for Indonesia through bilateral dose-sharing mechanism,” Minister of Foreign Affairs Retno L. P. Marsudi said in her press statement delivered virtually, Thursday (19/08).

The Minister stressed that the Government will continue to work hard to fulfill Indonesian people’s need for vaccine in order to immediately achieve herd immunity.

“The Government has also purchased 1,560,780 doses of Pfizer vaccine that have arrived this afternoon. Then, 567,500 doses of AstraZeneca and five million doses of Sinovac vaccines will be received tomorrow. The Government will continue to improve efforts to secure vaccine supplies for Indonesian people’s needs,” she said.

According to Retno, she had a dialogue about vaccine support from the Dutch Government with her Dutch counterpart Sigrid Kaag and Dutch Prime Minister Mark Rutte in Den Haag, the Netherlands on 1 July 2021.

“On behalf of the Indonesian Government, I would like to express gratitude and appreciation to the Dutch Government for giving dose-sharing support and stronger cooperation in the future,” she remarked.

In her press statement, the Minister stated that the global COVID-19 transmission rate remains high that Director General of the World Health Organization predicted that with the current trend, there can be 300 million cases at the beginning of next year or even sooner.

Between 12 and 19 August 2021, Retno said, several regions have seen an increase in the number of weekly cases, namely North America with 12 percent, Europe with 3 percent, and Oceania with 24 percent.

Meanwhile, she added, ASEAN region has seen a 0.4 percent decline, but the number of cases in several of its member countries still rises significantly, such as Brunei Darussalam with a 304 percent surge, the Philippines with 41 percent, Vietnam with 12 percent, and Thailand with 6 percent.

“Indonesia, thank God, can decrease case transmission in that period by 22 percent,” she said.

According to the Minister, there are two main measures that countries can take to reduce virus transmission, namely enforcing mobility restrictions and health protocols. Besides these two measures, vaccination, she added, should be sped up to minimize the risk of transmission and severity of the disease if COVID-19 is transmitted, so it can decrease the number of patients who require treatment at hospitals and the mortality rate.

“Analysis of Public Health England shows that two doses of vaccine are effective to prevent hospitalization and death due to the highly infectious Delta variant. Data from the US Centers for Disease Control and Prevention also shows that hospitalization and mortality rates in the United States have declined since vaccination began in early 2021. Meanwhile, the Health Institute shows that 99 percent of deaths in Italy were among COVID-19 patients who were not vaccinated,” she said.

Retno went on to say that the Government will continue to work hard to ensure vaccine supply security of Indonesian people through all available routes and mechanisms and along the way will keep speaking up for vaccine equality for all countries.

“The drop in cases in Indonesia should not make us drop our guard. We should remain vigilant. Let us continue to step up efforts, to support vaccination drive together, and to speed up vaccination rate,” she remarked. (DH/MUR)