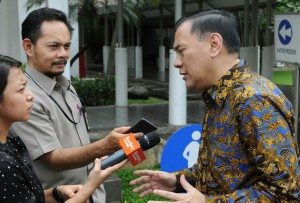 Governor of Bank Indonesia (BI) Agus Martowardojo said Indonesia’s economy is in good condition, marking the 100days administration of President Joko Widodo (Jokowi) on Wednesday (28/1). Even, in this January 2015 Agus predict will be deflation.

“Indonesia’s economy is in good condition and it is seen from inflation. We expect to have very low inflation in January, and possibly deflation. January would have close to zero inflation, “said Agus Matowardojo together with a number of economic ministers after received by President Jokowi, at the State Palace, Jakarta, Wednesday (28/1).

Agus assess that the low rate of inflation this time is the impact of the policies of President Jokowi that lowers fuel prices on 1 and 19 January 2015. “I expect that later in the end of 2015 inflation could return at 4.1 percent. If in the revision of state budget (APBN-P) inflation of 5 percent, it has been as expected by BI,” Agus said.

On that occasion, Agus Martowardojo welcomed the steps taken by the President that launched the One Stop Services (PTSP), this is part of the 100 days programs of President Jokowi. Moreover, because the 22 ministries/institutions have expressed their willingness to delegate the authority in issuing of licenses to the Head of BKPM, and assign their officials at to the Central PTPS in BKPM.

“If the licensing process was really able executed, PTSP will build credibility of Indonesia. It was welcomed by the public, both in Indonesia and abroad as part of structural reforms,” Agus said.

Agus estimates the current account in 2015 will range between 3.3 per cent – 3.5 per cent, that will reach the 3 percent at the end of the year, with a better quality than in 2014.

“If in 2014 the import component consists of many consumer goods, while 2015 will be a lot of productive components, to build infrastructure and investment,” Agus said.

If the Revised of State Budget (APBN) in 2015 approved by the House of Representative (DPR), according to Agus, Indonesia will have savings to build infrastructure and investment.