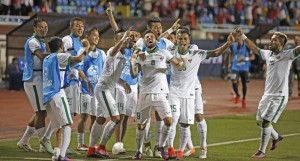 President Joko Jokowi Widodo congratulated the Indonesian Soccer Teamfor making it to theFinals of the ASEAN Football Federation (AFF) Suzuki Cup 2016 Soccer Championship after drawing with Vietnam 2-2 to win 4-3 on aggregate in an away leg match at My DinhNational Stadium in Hanoi on Wednesday (7/12).

The two goalsfor Indonesia were scored by Stefano Lilipalyin the 54th minute and ManahatiLestusen who netted a penalty. Vietnam led the match 2-1 first through the goal scored by Vu Van Thanh in the 84th minute and Vu Minh Tuan in the 90th minute.

For the record, Indonesia won the first leg 2-1 in a match held at PakansariStadium, Cibinong, Bogor, Saturday (3/12).

Following the success, PresidentJokowi, who was on his working visit in Bali, took to Twitter and congratulated the Team. Congratulations to the Indonesian Team who has made it to the Finals of AFF Cup. Keep up the good workfor the glory of our country, the President tweeted through this Twitter account on Wednesday (7/12).

Cabinet Secretary PramonoAnung and Minister of Youth and Sports Imam Nahrawialso praisedthe Team for successfully storming into the Finals.Alhamdulillah, Indonesia wins and reaches the FINAL. I salute them and am proud of them, Pramono wrote through his personal Twitter accountshortly after the match.

Meanwhile, Minister Imam Nahrawi, who watched the match live on TV from Denpasar, Bali, said he was proud with the struggle of theTeam in reaching the Finals.I am proud with theirstruggleduring the match last night. Their relentless spirit and hard work is amazing. Congratulations to the Team, Imam said.Imam also hopes that the Indonesian Team can also bring a good result at the Finals.I hope we can be the Champion at this years AFF Cup Finals, the Minister said.

Indonesia will take on the winner of the semifinal legs between Thailand and Myanmar. The Final is to be held on 14 and 17 December.