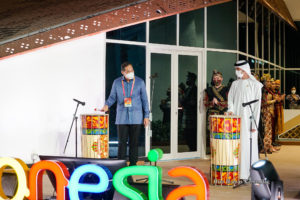 “Indonesia’s Pavilion adopting the theme of “Creating the Future, From Indonesia to the World,” which showcases Indonesian civilization in three time zones, “Yesterday, Today, and Tomorrow,” and highlights the golden era of the past, present, and future has become an attraction for a growing number of foreign visitors,” Director General of National Export Development (PEN) of Ministry of Trade Didi Sumaedi said.

Didi added that Indonesia’s Pavilion tells a story to visitors about how Indonesia is preparing for a better future through digitalization. One of the offered points of interest is a video displaying the potential and natural resources of Indonesia played in a theatre room.

According to Didi, Indonesia’s weekly theme and business forum is the excellence of the pavilion. In the first week of Expo 2020 Dubai, from 1 to 7 October 2021, Indonesia’s Pavilion adopted the theme of “Biodiversity and Digitalization of Micro, Small, and Medium Enterprises (MSMEs)”. Several top products showcased in the first week include products made from coconut, coffee, spices, and bamboo.

Indonesia’s Pavilion uses the concept of Golden Indonesia 2045. It occupies a land of 1,860 square meters and a three-floored building area of 3,000 square meters, which is located in Opportunity District zone.

“Indonesia’s Pavilion that showcases three time zones, “Yesterday, Today, and Tomorrow”, will open the world’s eye to see Indonesia’s strength in the past, present, and future as a global strength. Let us welcome everyone from across the world to Indonesia’s Pavilion. We hope that the world will realize and acknowledge our islands as an opportunity to trade, invest, and visit,” Indonesian Trade Minister Muhammad Lutfi said while inaugurating Indonesia’s Pavilion, Friday (01/10).

Lutfi stated that Indonesia’s Pavilion was built based on the country’s motto “Unity in Diversity” that is wrapped with patches of different Indonesian traditional batik textiles. Inside, Indonesia’s Pavilion provides an experience of interactive journey through the past, present, and future. More than 300 MSME products will be displayed to show the Indonesian Government’s support for 64 million Indonesian MSMEs to enter the global market.

“During the exhibition period, we will also carry out a series of programs to exhibit our country’s resources. The event is also supported by 22 ministries and Government institutions, eight provincial governments, and our corporate partners,” he remarked. (PR of Ministry of Trade/UN) (DH/MUR)

The official website of Ministry of Trade can be accessed through this link.