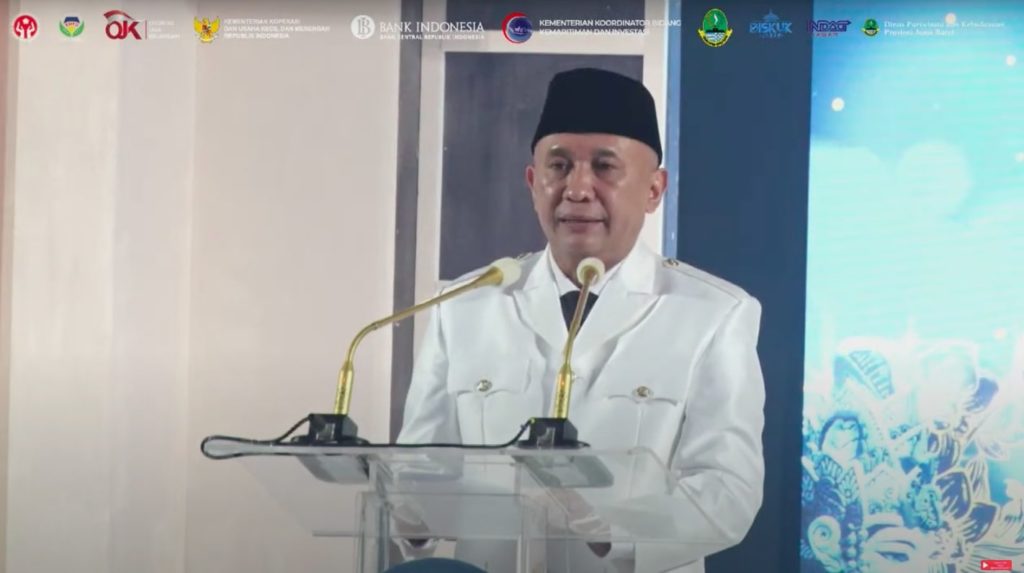 “Given the condition, the national campaign to buy Indonesian products (Gernas BBI) that President Jokowi declared becomes a form of Government’s alignment to MSME revival through the acceleration of digital transformation,” he said while kicking off the Indonesia with MSMEs Campaign, Saturday (03/04) in West Java provincial capital of Bandung.

In line with the movement, the event also opened the April period of Gernas BBI that adopted the theme of “Great MSMEs of West Java”.

Teten stated that through the synergy created by all stakeholders, the number of MSMEs present in the digital ecosystem has increased rapidly, reaching over 19 percent of the entrepreneur population or at least 12 million MSMEs.

“We will continue to push for MSME digitalization transformation. The Government and all stakeholders will continue to collaborate to achieve the target of 30 million MSMEs in 2023. Five hundred thousand artisan MSMEs are expected to be onboard the digital ecosystem every month,” he said.

Nevertheless, the Minister underscored that digital presence of MSMEs is not enough, adding that digital literacy issues, human resources development, and production capacity and quality improvement must also be overseen.

Therefore, Teten said, Gernas BBI activities in April will not only be focused on the marketing aspect but also the upstream, human resource aspect, and business process.

Teten went on to say that Gernas BBI is the embodiment of cooperation spirit, adding that it is a synergy to accelerate national economic recovery by strengthening domestic MSMEs.

On that occasion, the Minister also pointed out that the pandemic can serve as a great opportunity to prepare future MSMEs.

“In my point of view, the future Indonesian MSMEs are entrepreneurs who continue to explore a repertoire of traditions and cultural values in their products, wrapped with technological exploration that is relevant to the current issues. Technopreneurship and sociopreneurship are a representation,” he remarked.

Teten also expressed confidence that MSMEs still deserve to bear the title of national economy hero, adding that their resilience, quality, and uniqueness continue to grow each day.

However, he said, synergy and collaboration with all stakeholders are crucial to guide them and ensure that the MSMEs are present as winners and pride of Indonesia.

The Minister also urged all Indonesian people to support acceleration of national economic recovery by buying the best MSME products in West Java province during the series of Gernas BBI activities in April this year.

Teten also appealed to the public and stakeholders to foster MSMEs and join the Indonesia with MSMEs Campaign so efforts to strengthen MSMEs will be integrated and reinforced. (PR of Ministry of Cooperatives and SMEs/UN) (DH/EP)