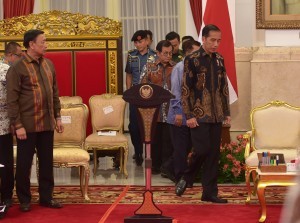 Following the success in organizing three international events, including the 18th Asian Games 2018, the Asian Para Games, and the 2018 Annual Meetings of the International Monetary Fund (IMF) and World Bank Group (WBG), President Joko Jokowi Widodo praised the Vice President and his Ministers for successfully organizing those three events.

Fistly, the 2018 Asian Games led by Vice President, the Asian Para Games led by Coordinating Minister for Human Development and Culture, in which both event involved Minister of Youth and Sports, and Minister of Administrative and Bureaucratic Reform. It was then followed by the hosting of the 2018 IMF  WBG Annual Meetings led by Coordinating Minister for Maritime Affairs, President Jokowi said in his remarks at Plenary Cabinet Meeting on the Evaluation of Disaster Management at the State Palace, Jakarta, Tuesday (16/10).

The President also conveyed highest appreciation to Indonesian National Defense Forces (TNI) and Indonesian National Police (Polri) personnels for ensuring security and stability during the Asian Games, Asian Para Games, and IMF  WBG Annual Meetings. I would like thank the TNI and the Polri for their hard works in ensuring that the events could run smoothly and safely, President Jokowi said, adding that the success in hosting those three major events proves that Indonesia is a big country able to host world-class events with good management and governance.

Of course, we are proud of such achievement and it will be our valuable strong point to move forward for a better future, President Jokowi said.