1,684 WNI Has Been Successfully Evacuated from Yemen 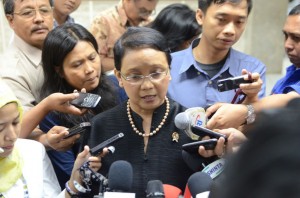 A total of 1,684 Indonesian citizen (WNI) from an estimated 4,000 more citizens who live in Yemen, up to now has been successfully evacuated from that country.

Minister of Foreign Affairs Retno L.P. Marsudi explained that from 1,684 citizens who had been evacuated from Yemen, as many as 1002 has been successfully evacuated up to Indonesia, while 682 are still not up to Indonesia but was out from Yemen.

“I repeat, the number of citizens who are already out from Yemen as many as 1684, with details of 1002 had returned to Indonesia, and 682 were outside the territory of Yemen and ready to return to the homeland,” said Retno told to reporters at the Presidential Office, Jakarta, Monday (13/4) afternoon.

Minister of Foreign Affairs explained, this morning at around 07.34 local time, has been successfully evacuated 90 citizens from Yemen and brought to Djibouti (Ethiopia) using another vessel. He mentioned that in the evacuation, beside of WNI there are also 67 Malaysians, and 3 Thai citizens.

“So, with this condition once again we are very grateful that the Indonesian citizens who are in Aden had to be evacuated, after couple of time we tried to evacuate but did not succeed because the security situation is not conducive at the moment,” said Retno as he mentions, this morning, there are as many as 491 WNI has arrived in the home land. Evacuation carried out by using the Indonesian Air Force (TNI-AU) plane.

Minister of Foreign Affairs grateful for the success of evacuating citizens from Aden, Western region of Yemen, so now her side is trying to find ways to conduct the evacuation of citizens (WNI) in the East region of Yemen, the Tarim area and Mukalla which until today is actually more conducive.

He said, now there are 584 citizens who come from Tarim, so if originally there were only 20-30 people of WNI in the Tarim who want to be evacuated, now the number reached 584 people. “We will fly back to Indonesia by plane,” Minister said.

Likewise, citizens who are still in Mukalla, according to Retno, gradually we pulled into Salala, and from Salala would be sent directly to Indonesia.