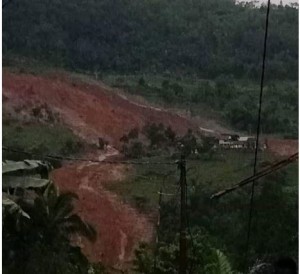 At least two people were killed and 41 people were missing after a landslide struck Sirnaresmi Village in Sukabumi, West Java, on Monday (31/12) at 17.00 Western Indonesia Time.

Head of Center for Data Information and Public Relations of the National Disaster Mitigation Agency (BNPB) Sutopo Purwo Nugroho said that as of Tuesday (1/1) at 02.30 Western Indonesian Time 32 households (107 people) were affected by the landslide, while three people were injured and 61 people were displaced in the disaster.

The landslide, which was triggered by a heavy rain, also buried 34 traditional village houses in the area.

“The evacuation of the victims is underway. Rain, darkness, power outage and limited access for cellular communications hamper the evacuation,” Sutopo said in a press release on Tuesday (1/1).

Sutopo went on to say that the Regional Disaster Mitigation Agency (BPBD) along with the Indonesian National Defense Forces (TNI), the Indonesian National Police (Polri), National Search and Rescue Agency (Basarnas), local officials, volunteers and the locals are conducting search and rescue operation. Data collection is still being carried out to ensure the number of victims and houses buried by landslides.

“Road access to landslide location is steep and rocky and the rain further hampers the evacuation process,” Sutopo said, adding that the BNPB works with the BPBD of Sukabumi and the BPBD of West Java to continuously monitor the disaster mitigation. (Humas BNPB/ES)

Update: The death toll of the landslide has reached 15, with 20 other people are still missing.