2 Months Occurred Deflation, President Jokowi Make Sure that 2 Weeks Again the Rice Price Down by Rp 2,000 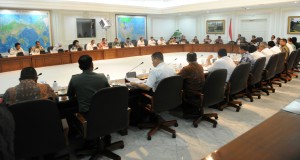 The atmosphere of plenary cabinet meeting chaired by President Jokowi, in the office of President, Jakarta, Wednesday (4/3)

President Joko Widodo (Jokowi) accompanied by Vice President Jusuf Kalla lead Plenary Session of the Cabinet, in the office of President, Jakarta, on Wednesday (4/3) around 10.00 am.

President Jokowi in his introduction speech conveyed on the rate of inflation that occurred in January and February, then experiencing deflation. “We should be grateful because of in last January deflation of 0.24 percent, then in February also deflation (0.36 percent, red). This time we can continue to keep inflation at a low position,” President said.

The President hoped that this deflation will give a very good impact on economic growth, the purchasing power and can relieve the public in buying goods.

According to President Jokowi, upheaval inflation or rising prices like rice, actually already visible in December, so that it should be anticipated in January, and then performed the action.

However, it is recognized by the President, if the first one, this is because there is a problem that is a bit late in the planting, means that late harvesting, making it less controllable.

But I’m sure with the operation of rice for the poor (Raskin) yesterday, we would expect in a week, or a maximum of two weeks, I am sure that the price of rice down to two thousand. This can be a lesson for us all, so when the price rose a bit, can immediately be pursued,” the President said.