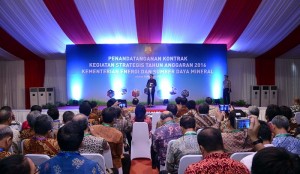 President Joko Jokowi Widodo on Monday (29/9) morning, witnessed the signing of the 2016 Strategic Activities Contracts of the Ministry of Energy and Mineral Resources (ESDM).

In his directive, the President reasserted that 2016 is the year for work acceleration and he will run after and encourage all ministries/institutions to accelerate the contract signing and development project implementation.

After the signing (of the contracts), the works should start the following day. The contract must be signed, implemented, and finished rapidly, yet still put the quality as the first priority, President Jokowi said.

The President also reminded the Ministry of Energy and Mineral Resources to accelerate the budget realization in 2016.

The event, which was held at the Plaza of the Ministry of Energy and Mineral Resources was the third stage. The first and second stages were already conducted in January and February 2016.

On that occasion, President Jokowi witnessed the signing of 24 projects including the project with the biggest value: Natural Gas Network Construction and Development for Domestic Use Project in Prabumulih, South Sumatra which worths Rp 493.5 billion, and the most strategic project: the Construction of 2 MW Solar-powered Electric Generators (PLTS) in Manokwari which worths Rp 57.2 billion. Overall, 133 contract packages worth Rp 3.04 trillion were signed in this third stage.