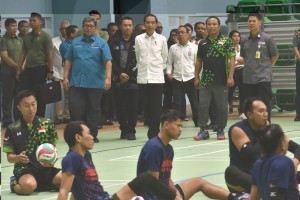 The Asian Para Games will be held for six days. Within that short period of time, Indonesia must leave a legacy, which is humanity. We must exhibit stronger humanity, Raja told reporters after attending the Asian Para Games briefing with President Joko Jokowi Widodo, in Jakarta, Thursday (27/9).

For the record, the number of participating countries and athletes is higher than that in the Incheon Para Games in 2014 and Guangzhou Para Games in 2010. Therefore, the event is expected to be more lively and magnificent and can set a new benchmark for the next Asian Para Games, Raja said.

Raja added that the mascot of this year Asian Para Games is eagle, which represents motivation and mobility.

This mascot portrays the tremendous enthusiasm and energy of disabled athletes who take part in the Games. They are super humans who fight hard for their countries, he said.

For the record, President Jokowi has set target of winning 16 gold medals and taking the 8th position in the medal tally. Minister of Youth and Sports Imam Nahrawi said that all efforts and preparations had been made to meet the target. The Asian Para Games Chef de Mission Arminsyah truly focuses on the details of the preparation and the President has been monitoring the works, Imam said.

I am sure the target set by the President will be achieved or even exceeded, the Minister added. (RAH / FID / OJI / JAY / ES) (STU/EP/Naster)