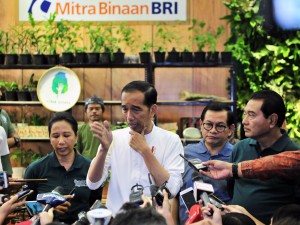 Indonesias Corruption Perception Index (CPI) score in 2018 rose one point to 38 compared to that in 2016 and 2017. President Joko Jokowi Widodo told his people to be grateful for the score.

Let me tell you, we must be grateful for any improvement. Indonesias CPI score in 2018 was 34, and now it improved to 38, President Jokowi responds to reporters questions after opening the 2019 Green Festival, at the Cendrawasih Room, Jakarta Convention Center (JCC), Jakarta, on Thursday (31/1).

The statements were made by the President in response to results of research conducted by Transparency International Indonesia (TII) in which Indonesias CPI score for 2018 amounting to 38 from scale 0 to 100. For the record, the score of 0 indicates very corrupt, while 100 is clean on corruption.

Ranked 89 (of the 180 countries surveyed), Indonesias score increased by 1 point or increased by 7 ranks compared to the result in 2017, Research Department Manager at the TII Wawan Suyatmiko said in his presentation, at the Corruption Eradication Commission (KPK)’s Red and White Building, on Tuesday (29/1).

After the opening of the 2019 Green Festival (31/1), President Jokowi said  that compared to CPI score in 1998 which was 20 and regarded as the most corrupt country in Asia, Indonesia showed a great improvement by scoring 38 in the latest CPI.

It does not happen instantaneously, the Government needs to improve its system, as well as other aspects. Therefore, the increase (in score) must not be taken for granted, President Jokowi firmly said. (FID/JAY/ES)