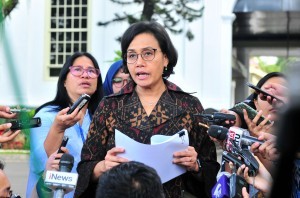 Indonesia 2018 state revenues will reach Rp 1,936 trillion, rising by 18.2% compared to that of last year which only grew by 6.5%, Minister of Finance Sri Mulyani said.

For the state expenditure, she added, it is estimated to reach Rp 2,210 trillion, rising by 11% compared to that of last year, which only rose at 6.9%.

The total amount of 2018 State Budget is estimated to record a deficit of only 1.86%, far lower than the forecast of 2.19%, the Minister continued.

The Minister maintained that this is a good improvement as a capital to face economic uncertainty in 2019, amidst trade war between America and China or the possibility of global economic slowdown. We should be vigilant, Sri added.

Regarding the 2019 State Budget, Sri Mulyani said the budget for state expenditure will reach Rp 2,461 trillion, higher than this years Rp 2,210 trillion. She added that the Government is focused on how to optimally use the State Budget to maintain similar or even exceed this years achievement.

According to the Minister, the Government remains aware of the global condition in terms of exchange rates, interest rates, value of commodity prices, as well as oil and natural resources which will certainly affect the revenues. We will continue to maintain the State Budget and protect our economy, said the Minister.