2019 Election Expected to be Complicated and Complex, Minister Says 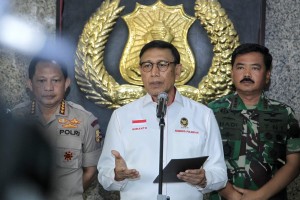 The 2019 Election is expected to be more complicated, complex, and massive compared to the previous elections because they will be held simultaneously, starting with legislative elections and the President and Vice President Elections, according to Coordinating Minister for Political, Legal, and Security Affairs Wiranto in a press statement on Monday (24/9).

He added that in the legislative election at the central and region level for example, there will be 5 options that should be made by the people, including in Regional Representative Council (DPD) election. The Minister also mentioned the participants in the elections are political parties that should at least gain the 4 percent of the parliamentary threshold; otherwise, they will be eliminated.

It will be quite intense because there will be a lot of activities that we should secured or organize, Wiranto said.

Therefore, he added the Government should anticipate the vulnerability of the election by holding coordinating meetings to address and assess the vulnerability level during the election. The authorities have already discussed guidelines and briefings to stakeholders in the regions, Wiranto said.

Most importantly, he added, is that coordination should be in harmony from lowest to the highest official level of the election, including among officials at the province, district, and city level. Those officials, he added, should understand their duties and the vulnerable possibilities that could occur in their areas.

The Minister went on to say that the Government will take preventive actions to solve the issues before they happen, to avoid any consequences and will remind the people to vote to the rules and regulations based on their rights to vote. He also expressed hopes that money politics and the use of political identities related to ethnic, religion, racial, or social group affiliations (SARA) could be avoided.

Wiranto also mentioned the rapid development of social media and called on the people not to let social media become a means for negative campaign, hoax, hate speech, slander, and inappropriate criticisms. (Public Relations of the Coordinating Ministry of Political, Legal, and Security Affairs/ES)(HYP/EP/Naster)