2021 Budget Deficit Forecast to be Lower than 5.7% Target: Sri Mulyani 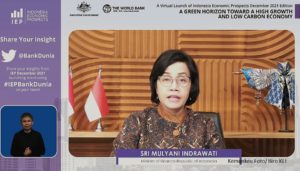 Minister of Finance Sri Mulyani Indrawati in the E-launch of The World Bank Indonesia Economic Prospects Report, on Thursday (12/16) (Photo: PR Office of Ministry of Finance)

Minister of Finance Sri Mulyani Indrawati has announced that the 2021 State Budget deficit is forecast to be  between 5.1 to 5.4 percent of Gross Domestic Product (GDP).

According to her, the figure is lower that of the 2021 State Budget target, which is 5.7 percent of the GDP.

“This year, the budget is forecast to have a 5.7 percent deficit. However, since the recovery is robust and from the income and commodity explosion, we estimate that the deficit will be at 5.1 percent to 5.4 percent. It is even lower that we have set before,” she said during the online session of the E-launch of The World Bank Indonesia Economic Prospects Report, Thursday (12/16).

As for 2022, Sri Mulyani said that the deficit is forecast to be at 4.8 percent of the GDP. However, the figure set has not taken into account Law on Harmonization of Tax Rules that potentially increases the income and 2021 economic recovery program that is expected to bring positive impacts in many sectors.

“This design has not taken into account some reformation in tax and fiscal sectors,” she said, adding that with the design, the Government will continue to work better to revive Indonesia’s  economy in in 2022.

The Minister also expressed belief that the role of fiscal policy remains very important, especially amid the COVID-19 pandemic era.

She further said that the 2022 State Budget will support the economic recovery program by prioritizing spending for human resources development, education, health, and social spending.

“We hope that the growth level will recover above 5 percent. In the 2022 State Budget, we set 5.2 percent for the economic growth in 2022,” she remarked. (PR Office of Ministry of Finance/AIT) (AW/EP)