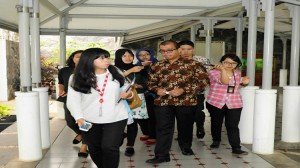 Cabinet Secretary Andi Widjajanto was intercepted by reporters on the sidelines of the limited meeting, in the President office, Jakarta, Wednesday (11/3)

President Joko Widodo (Jokowi) is planned in the near future will make a state visit to Japan and China.

Cabinet Secretary, Andi Widjajanto said that the visit that the time is relatively the same, there are two activities that will be undertaken by President Jokowi.

“In China there are two events, the first at the Beijing State Visit and second in Hainan,” said Andi to reporters at the Presidential Office, Jakarta, Wednesday (11/3) afternoon.

According to the Cabinet Secretary, on a visit to Japan and China, President Jokowi is proposed to be a speaker at the economic forum.

“It is proposed as it and there will be a summit, but the agenda is not final and still in process, there are some things that need to be resolved between the Ministry of Foreign Affairs, will also performed finalization in Beijing and the Minister of State Owned Enterprises (BUMN), this week,” Andi said.

“But the officials under the Chief of Staff or the Deputy will use roman numerals only, so as assigned chief of staff will be directed, because the character is a cross-issue and cross-dimensional,” Andi said.

Regarding how many Deputy in Chief of Presidential Staff, according to Cabinet Secretary, in accordance with Presidential Decree there are five deputies. However, the newly proposed by the Chief of Staff only four deputies.