Such as Bung Karno in 1962, Jokowi Leads Directly the Organizing of Asian Games 2018 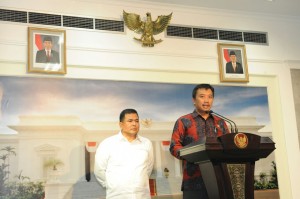 Menpora, Imam Nahrawi accompanied by Secretary General KOI presents the results of limited meeting on preparations for the Asian Games in 2018, in the office of President, Jakarta, Thursday (19/3).

The government enthusiastically welcomed the appointment of Indonesia as the host of the Asian Games in 2018.

“The President is very concerned, even this will used as a momentum to evoke the spirit of our nationalism and nationality,” said Minister of Youth and Sports (Affairs) Imam Nahrawi told to reporters after attending a limited cabinet meeting chaired by President Joko Widodo (Jokowi), at the Presidential Office, Jakarta Thursday (19/3) night.

According Minister of Youth and Sports Affairs, as in 1962 when Indonesia hosts led by President Soekarno (Bung Karno), then in the Asian Games to-18 year 2018, will be chaired by the President Jokowi who will act as Chairman of the Steering.

Minister of Sport and Youth Affairs, Imam Nahrawi explained, President Jokowi very concerned that the Asian Games 2018 involving all stakeholders in the sport, especially sportsmen who had brought the fragrant of the country name, either when in the Olympics, Asian Games, as well as Sea Games and even the sports people.

“Therefore, in the steering committee later, the President will involve a lot of athletes who excel as well as earlier mentioned, Rudi Hartono, Taufik Hidayat, there are also Susi Susanti, Alan, Darius, Richard Sam Bera and several other names,” said Imam as he mentions, therefore the draft of Presidential Decree on Committee of the Asian Games in 2018 irreparably. Hopefully, tomorrow afternoon draft of the presidential decree on Asian Games in 2018 Committee has been finalized.

On the issue of contractual time limit, according Minister of Youth, it should be March 20 should be completed. But because there are a greater concern of the President related to the involvement of stakeholders other sports, then his side will ask for the chance to discuss a few days after the president returned of a trip abroad, at the end of March. (Humas Setkab/ES)