25 to 28 October, President Jokowi Will Visit to the US 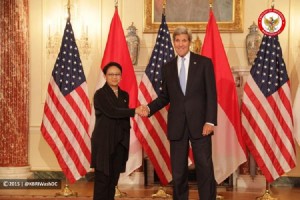 MoFA Retno L.P. Marsudi met US Secretary of State John Kerry, in Washington DC, US, on Monday (21/9), discussed the planned visit of President Jokowi to the US.

President Joko Widodo (Jokowi) is scheduled to visit the United States on 25 to 28 October 2015, in order to meet the invitation delivered by President Barack Obama. The visit plan announced by the Minister of Foreign Affairs (MoFA), Retno LP Marsudi and US Secretary of State John F. Kerry, when they met in Washington DC, United States (US), Monday (21/9).

Regarding the bilateral talks between President Jokowi with US President Barack Obama, a press release of the Ministry of Foreign Affairs on Monday (21/9) said the two leaders will discuss issues of mutual interest and global challenges, including promoting religious tolerance and moderate Islam in facing radicalism and extremism.

“The two leaders will also discuss the opportunities to make Indonesia as an investment destination of the United States,” reads the press release.

As for the meeting with the business community in the US, the Foreign Ministry press release said the meeting will discuss the work plan, which will play an important role in maintaining economic growth in Indonesia.

Other issues to be discussed in the meeting between President Jokowi with the US business community is a matter of security and defense cooperation, maritime strategy, and clean energy.

The visit of President Joko Widodo conducted in line with 5 (five) years the comprehensive partnership between Indonesia and the US, which was launched in 2010. “As the visit of President Joko Widodo to the United States, two Heads of State planned to launch the relationship between Indonesia and the United States more strategic,” Foreign Minister Retno Marsudi said.