Attended by President Jokowi, PM of Malaysia Praised Spirit of ASEAN When Evacuation in Yemen 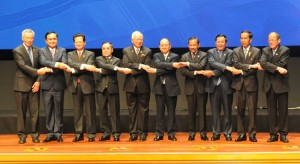 President Jokowi among the ASEAN leaders at the opening of the ASEAN Summit, in Kuala Lumpur, Malaysia, on Monday (27/4) morning

On the second day of his visit in Malaysia, President Joko Widodo (Jokowi) attended the opening of the 26th Summit of the Heads of State/Government of ASEAN at the Plenary Hall, Kuala Lumpur Convention Centre (KLCC), Monday (27/4) morning. The arrival of President Jokowi in KLCC greeted by the Prime Minister of Malaysia, Dato ‘Sri Mohd Najib Tun Abdul Razak as Chairman and host of the 26th ASEAN Summit.

Malaysian Prime Minister Najib Razak in his speech said that the formation of an ASEAN Community by the end of December 2015, it is necessary to strengthen the roadmap so that this community can run stably. “For the future of ASEAN and the community,” Najib said.

On that occasion, Prime Minister of Malaysian praised the efforts of ASEAN shown in humanitarian side, it is been particularly evident that when Malaysia, Singapore, Thailand, Vietnam, Cambodia and Indonesia jointly evacuate casualties war in Yemen.

“The government of the ASEAN countries doing well to provide assistance to each other, that is the spirit of ASEAN,” Najib said.

As reported previously, when performing evacuation of citizens in Yemen, Evacuation Team of the Ministry of Foreign Affairs of RI also evacuated a number of Vietnamese and Cambodian citizens who are stuck in the battlefield in Yemen

Coinciding with the opening of the 26th ASEAN Summit also launched a television channel “GoAsean” which aims to enhance the growth of the tourism industry in the ASEAN region. GoASEAN TV programs, promote tourism, and culture of the ASEAN countries, which can be accessed through various devices television (IPTV, mobile, pay TV).

Heads of state/government and delegates attended the opening of the 26th ASEAN Summit from ASEAN countries. Additionally, seemed present the Cabinet Secretary of RI Andi Widjajanto, Coordinating Minister for Political, Legal and Security Tedjo Edhy Purdijatno, and Minister of Foreign Affairs Retno LP Marsud, accompanying President Jokowi in the opening of the summit.

After opening of the summit, the Heads of State/Government follow the discussion forum. This forum has an important role to bridge the interests of governments, businesses and the ASEAN community.   (Humas Setkab/ES)