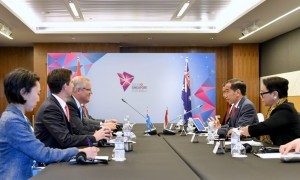 On the second day of his working visit in Singapore on Wednesday (11/14), President Joko Jokowi Widodo is slated to attend a series of agenda of the 33rd ASEAN Summit at the Suntec Convention and Exhibition Center.

Deputy to Presidential Secretariat Chief for Protocol, Press, and Media Affairs Bey Machmudin in his press release said that there will be four agendas that would be attended by the President, namely the ASEAN-Australia Informal Breakfast Summit, the 21st ASEAN-China Summit, the 20th ASEAN-South Korea Summit and a Working Lunch hosted by Singapore Prime Minister Lee Hsien Loong.

The next agenda is the 3rd ASEAN-Russia Summit, and witnessing the signing of MoU between the Eurasian Economic Commission (EEC) andASEAN on Economic Cooperation, Bey said.

In the afternoon, according to Bey, President Jokowi is scheduled to attend the 2nd Regional Comprehensive Economic Partnership (RCEP) Summit and the series of events of the 33rd ASEAN Summit concluded with a Gala Dinner for leaders of ASEAN countries, leaders of Non-ASEAN and Non-EAS countries and the leaders of countries invited by the ASEAN Chairman.

On the sidelines of the Summit, the President will also hold some bilateral meetings. On the morning08:00 a.m. local timePresident Jokowi will hold a bilateral meeting with Australian Prime Minister Scott Morrison.