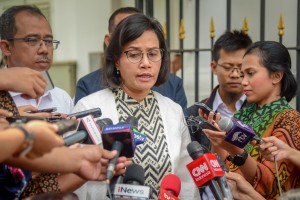 Minister of Finance Sri Mulyani Indrawati said, according to the Law approved by the Government and the House of Representative (DPR RI), funds are to be allocated to urban villages or usually called Urban Village Funds amounting to 3 trillion rupiah in 2019.

The distribution process to urban villages will be through General Purpose Grant (DAU), said the Minister of Finance to the Press after attending the limited cabinet meeting on Allocation for Village and Urban Village Funds, at the Bogor Presidential Palace, in West Java, Friday afternoon (2/11).

According to the Minister, the Government will divide urban villages into three groups namely, the well developed group, the developing group, and the less developed group.

According to Presidential Instruction, all Urban Village Funds should be used to build infrastructure and facilities for the urban villages that are not in good condition, and it should also be used for the peoples welfare through employment opportunities, such as Cash for Work program, said the Minister.

Concerning the allocation, since it is through DAU, we will collaborate with the Minister of Home Affairs in the arrangement on how to use this 3 trillion rupiah urban village funds for approximately 8,122 urban villages in Indonesia, Sri Mulyani says.

The regulation has been stated in the laws and regulations, that regional Government should allocate urban village or village funds, said the Minister.

This urban village funds is an addition to the existing funds and its mechanism works as matching grants. If regencies and cities have allocated the funds, therefore we shall add them. Sri Mulyani ended. (MAY/EN/AGG/ES)