300 Youth of Asia Pacific Discussing the Urban Future in Jakarta 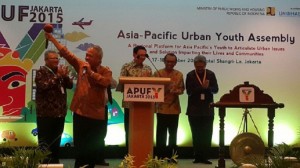 As many as 300 young people from 34 Asia-Pacific countries to discuss the future of urban areas in the Asia-Pacific Urban Forum (APUF) 2015, held at the Shangri-La Hotel, Jakarta, Sunday (18/10).

In his speech the Minister of Public Works and Public Housing (PUPR) Basuki Hadilmuljono, explained that young people have a strategic role in building the future of the city, and young people took part in the realizing the sustainable and inclusive city.

Other speakers in the forum are Governor of Jakarta Basuki Tjahaja Purnama, Deputy Ministry of Youth and Sports Gatot S Dewabroto, and several mayors of youths from the Asia Pacific region, including the Mayor of Bogor Bima Arya Sugiarto.

Minister PUPR Basuki Hadimuljono explains, APUF-Youth is the first association of organizations and different groups of young people, to conduct discussions about the urban agenda at the regional level. “APUFY offers steps towards strengthening constructive cooperation with the youth as stakeholders of the issues facing urban areas in the Asia Pacific region,” he said.

He said Indonesia recorded in the history, as the host of a series of the III Habitat Conference, held every 20 years. In 1976, I Habitat Conference in Vancouver, Canada, in 1996 in Istanbul Turkey, and in 2016 in Quito, Ecuador, with the theme of Sustainable Urbanization.  (Humas Kementerian PUPR/ES)/Sy.