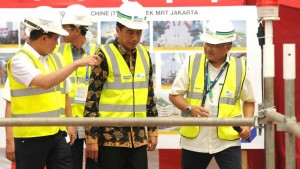 The machine that drills approximately 8 metres per day will operate 24 hours a day, starting from September to December 2016.

President Joko Widodo gave a name Antareja to the first drilling machine referring to a character of underground wayang.

According to the plan, the MRT project will use four drilling machines. Two machines will be used to drill a tunnel from Senayan, specifically under the statue of Api Nan Tak Kunjung Padam/eternal flames (Senayan Statue), South Jakarta, to Setiabudi, Central Jakarta. The other machine is still at assembly process.

The TBM machines use the first earth press balance technology in Indonesia. Constructed by Japanese company, the machines will be operated by Shimizu, Obayashi, Wijaya Karya and Construction Service.

The underground drilling is guaranteed to be safe, not causing vibration or landslide. People do not have to worry about the rainfall because the underground station is constructed with layered wall.

On the first corridor, that is 9.8 km length, MRT will pass the elevated road. When it get closer to Senayan Statue, the MRT will enter underground lane along 9.7 km length, heading to Senayan Roundabout.

The construction phase I (Lebak Bulus- Senayan Roundabout) is estimated to be finished by 2018 which will accommodate for 280,000 passengers per day.