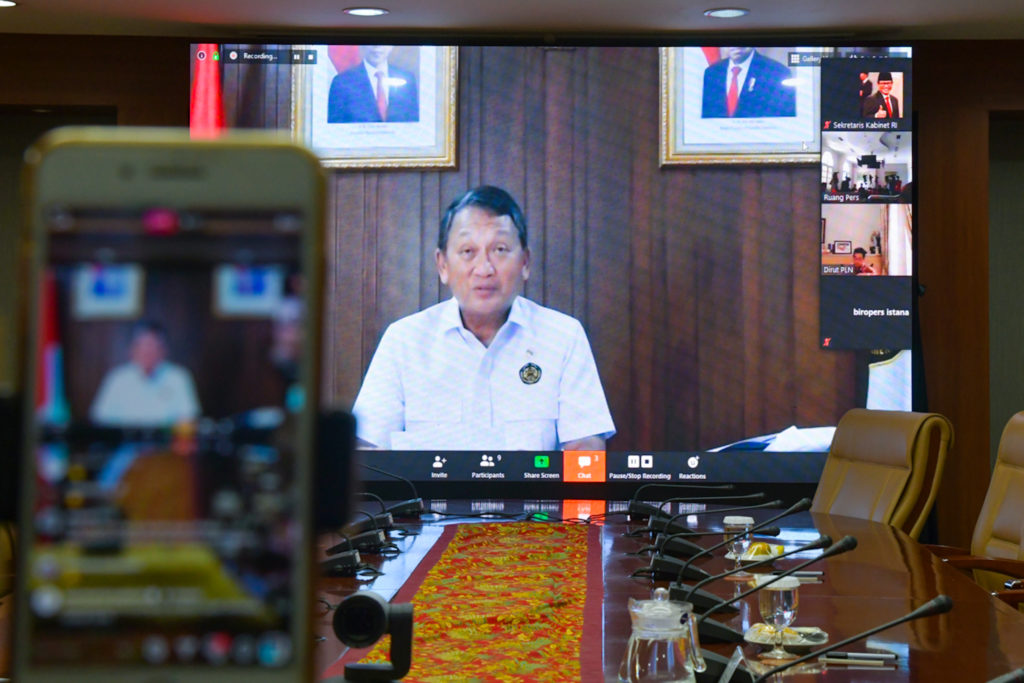 Minister of Energy and Mineral Resources gives a press statement after a Limited Meeting through video conference, Friday (3/4). (Photo by: Ibrahim/PR)

The Government has announced plan to supply electricity to 433 remote villages and 4,191 households this year.

“In accordance with the law, the state must guarantee the availability of affordable energy,” Minister of Energy and Mineral Resources Arifin Tasrif said on Friday (3/4).

“Out of 83,436 villages in the country, 83,003 villages have been electrified, meaning that the remaining 433 villages have not,” he said, adding that electricity has so far been provided by state-owned electricity company PT PLN in 74,430 villages.

Meanwhile, the remaining 5,515 villages, he added, are supplied by non-governmental organizations and assistance from the local governments.

“Since two years ago, we’ve provided electricity by installing 3,058 solar-powered energy saving lamps (LTSHE). This is a temporary measure,” he said.

“PT PLN has reported it has already mapped out the locations of those villages. There are still many villages, particularly in ​​Papua province which still have difficulties in getting supplies from the grids,” he said.

For this reason, Arifin said that new technology is needed to secure supply.

“We carried out the same program in 2021 to replace the LTSHE, which lasted less than three years. In 2022, we will take the same measure,” he said, adding that the households will also be supplied so there will be a rise in electricity usage for households to support household industries.

Arifin further said that electrification ratio since 2015 has been at 88.3 percent, while ratio of electrified villages has reached 96.95 percent.

“By the end of 2020, electrification ratio is expected to reach 98.93 percent, almost close to the village ratio which has reached 99.48 percent,” he said.

“Generally, we will use renewable energy. Voltages come from solar panels. We also provide electric energy charging stations as well as pico-hydro power plants,” he added.

The pico-hydro, according to the Minister, is smaller than micro hydro, which is on a scale of hundreds of kilowatts.

There is also a hybrid power plant that will use diesel for its backups and PLN’s grid, he added.

For the record, funding for this village electricity program is sourced from the Central Government’s budget, the Papua special autonomy budget, infrastructure fund, and the Village Funds.

“This is one of the government’s programs for energy distribution by utilizing renewable energy sources to be incorporated in the national energy supply system,” he said. (FID/EN)