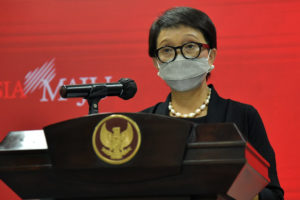 The evacuated 80 Indonesian citizens (WNI) and 3 foreign nationals, who are families of the WNI, have arrived from Ukraine at Soekarno Hatta airport, Tangerang, Banten, around 17:10 Western Indonesian Time (WIB), Thursday (03/03), Minister of Foreign Affairs Retno L.P. Marsudi has announced.

“To the evacuated WNI who have just been from Ukraine, I would like to say welcome to your homeland and have a good time with your family,” Retno stated in her written press statement, Friday (03/04).

According to the Minister, the recovery team from the country departed for Romania from Soekarno-Hatta airport, Tuesday (03/02) at 18:40 WIB using Garuda Indonesia aircraft and arrived at Henri Coanda Airport, Bucharest, Thursday (03/03) at 15:10 local time. The recovery plane departed from Bucharest to Jakarta through Medina at 20:23 local time (5.5 hours after landing) with a travel time of 17 hours.

However, there are 14 evacuees who still have to stay in Bucharest since 12 people were detected positive for COVID-19 while 2 others chose to stay to accompany their children who were positive for COVID-19. “The 14 people will continue to be monitored and accompanied by the Indonesian Embassy in Bucharest. If they have recovered, they will be sent home on a commercial plane,” Retno said.

In addition, the Minister also expressed appreciation to the Indonesian Ambassadors in Bucharest, Warsaw, Kiev and Moscow and all parties who worked hand-in-hand to evacuate the WNI from Ukraine as well as to the recovery team consisting of the Indonesian National Defense Force (TNI), the State Intelligence Agency (BIN), Garuda Indonesia airline, and other related parties who had helped the smooth recovery process.

“We also thank Minister of Defense, who is represented by Deputy Minister of Defense, who has given several advices during the evacuation process. We also express our appreciation to the Agency for the Protection of Indonesian Migrant Workers (BP2MI) who will facilitate Indonesian Migrant Workers’ repatriation to return to their respective homes,” Retno added.

On the occasion, the Minister also stated that the WNI in Kharkiv were able to leave the city and arrived in Lviv safely. “The Indonesian Embassy in Warsaw team has met and picked up the 4 WNI and also joined one additional WNI who had arrived in Lviv,” she said, adding that they will be escorted to Rzeszow safehouse in Poland to perform health check-up and then will be escorted to Warsaw to wait for their return to Indonesia.

“The Government will continue to make efforts to evacuate 9 WNI who are still in Chernihiv,” Retno remarked. (Ministry of Foreign Affairs PR/UN) (GWH/MUR)