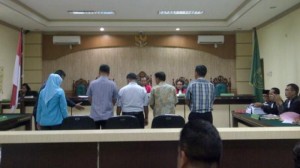 Based on data from Department of Monitoring and Control of the National Civil Service Agency (BKN), until 14 January 2019, there were 2,357 civil servants involved in corruption case that had been convicted by the court, but only 393 people had been officially discharged.

According to Ridwan, the BKN will continue to monitor the development of corruption cases involving civil servants, in particular those who have obtained inkracht status (a court decision that is legally binding and final).

For the record, according to the Joint Ministerial Decree between Minister of Home Affairs, Minister of State Apparatus Empowerment and Bureaucratic Reforms (PANRB) and Head of the National Civil Service Agency (BKN) Number 181 / 6597 / SJ; Number 15 Year 2018; and Number 153 / KEP / 2018 on 13 September 2018, graft-convicted civil servants who have obtained alegally binding and final court decision should have been discharged no later than the end of 2018.

So, until 14 January 2019, a total of 891 civil servants have been officially discharged from their respective institutions, Ridwan concluded. (EN / Public Relations of BKN / ES)