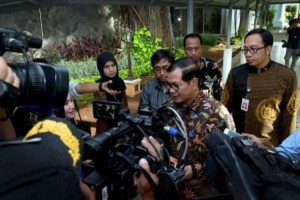 Cabinet Secretary Pramono Anung said that the 8th Economic Package consists of three aspects, namely the one map policy with the scale of 1:50,000, acceleration of development and construction of oil refineries in Indonesia and incentives for plane maintenance, repair and operation (MRO) companies.

According to Pramono, the new economic policy package aims to promote the countrys competitiveness in the global market.

Inevitably, we have to be ready to usher in the ASEAN Economic Community (AEC) and the Government is making preparations in many aspects. This is the time to gear up for AEC, to improve ourselves, Pramono said to reporters at the State Palace, Jakarta, on Monday (21/12).

Especially regarding the acceleration of the development of oil refineries, Pramono said that Indonesia currently has four oil refineries:  in Cilacap, Balikpapan, Balongan and Dumai, with the total capacity of approximately 900,000.

Pramono went on to say that through the new economic policy package, it is expected that in the near future, the Government could build two or three new oil refineries.

Nevertheless, Pramono said that currently the Governments priorities are to build two oil refineries in Bontang and in Tuban.

Regarding the incentives given for plane maintenance, repair and operation (MRP) companies, Pramono said that the Government had prepared the incentives.

Through the 8th Economic Policy Package, Pramono said that the Government hoped the countrys competitiveness, resilience, and economy would be better.

It was proven that when the Federal Reserve announced the rise in interest rates, it turned out that the resilience of our economy has got better and better, Pramono said. (FID/OJI/ES) (Naster/EP/YM)