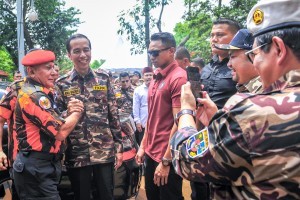 President Joko Jokowi Widodo once again clarified rumors that he is a member of now-defunct Indonesian Communist Party (PKI) which have been spreading lately through banners.

I have been patient enough for the past four years. I did nothing, I remained silence, but now I think I must clear this myself, President Jokowi said in his remarks at the opening of the FKPPI State Defense National Jamboree, at Ragunan Campground, Jakarta, Friday (7/12). For the record, FKPPI is Communication Forum of the Indonesian National Defence Forces (TNI)  the Indonesian National Police (Polri) Children.

The President explained that the PKI was banned in 1965-1966, while he was born in 1961. That means he was four back then. Is it possible for a toddler to join the party? the President asked.

Such unethical way of politics must be stopped. It damages the democracy and efforts to develop the nations intellectual life, President Jokowi added.

He also mentioned that there are pictures of him and PKIs chairman DN Aidit in 1955 spreading on social media.

I wondered why they shopped my face to that picture. It is unethical and uncivilized, the President said adding that he was not born in 1955 yet.

President Jokowi thought that the picture makes no sense and needs to be explained to people because more than 9 million Indonesians believe the rumors.

I respond to the rumors because a survey shows that at least 9 million people believe in this slander. Thats why I bring the issue here and there, the President firmly said.

The Head of State also brought up issues that he is a foreign stooge. He clarified by citing examples of management of Mahakam Block which was held by Japan and France for decades was taken over fully by the state-owned oil and gas company Pertamina.

The President also mentioned that Pertamina also owns 100 percent of shares of Rokan Block which has been managed by Chevron for decades. Soon, Freeport Papua will be managed by the state since the Government has signed Head of Agreement dan Sales and Purchase Agreement.

I already instructed related ministers to address this matter so that the state can acquire 51 percent of Freeport Indonesias shares this month. For 40 years, Indonesias ownership of Freeport is only 9 percent, and we did nothing, the President added.

President Jokowi wondered why after that efforts, he was instead accused as a foreign stooge.

I confronted them, a foreign stooge from which country? Dont twist the facts around. From now on, if there are groundless issues, I will not stay still, I will clarify, President Jokowi firmly said.

On that occasion, President Jokowi told the participants of State Defense National Jamboree and members of the FKPPI to be the sources of energy to change Indonesia.

We must change from inequality to social justice, from backwardness to progress, from individualism to gotong royong (mutual cooperation), from ignorance to brotherhood and harmony, and from consumerism to productivism, the President stated.

President Jokowi also called on the FKPPI to inspire all Indonesians to love their country and encourage them to make leaps of progress, and realize an advanced Indonesia.