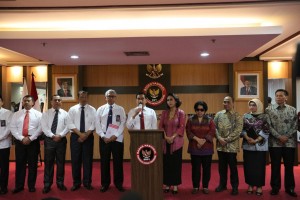 Three day before the closing day, as many as 93 people have registered to participate in the selection of commissioners of the Corruption Eradication Commission (KPK) for the 2019-2023 period.

The majority of applicants work as lecturers and advocates. There are 22 lecturers and 20 lawyers. The rest (applicants) work as doctors, tax officers, police officers, retired prosecutors, and financial officers, Chairperson of Selection Committee Yenti Garnasih said in Jakarta, Monday (1/7).

According to Yenti, the committee does not rule out the possibility of the extension of registration.  We not only see the quantity (of the applicants). If the applicants meet the qualification, we wont extend the registration time, she added.

Yenti added that the committee collaborates with the National Agency for the Eradication of Terrorism (BNPT) as an effort to prevent the KPK leaders candidates from being exposure to radical ideology.

About the indicators, well leave it up to the BNPT, she said.

Furthermore, cooperation with the BNPT also is related in tracking the record of the candidates, she added. In order to anticipate the dynamic situations in Indonesia, Yenti added.

One member of the committee member Hendardi said that the relation of radicalism ideology was not the only aspect that assessed by the committee. We also pay attention to the candidates integrity, track record, and independent attitude of the KPK leaders, Hendardi said.

For the record, registration of the selection has opened starting Monday (17/6) until Thursday (4/7) and the requirements for registration can be accessed at https://www.setneg.go.id. (*/Humas Kemensetneg/ES)