About Budget, Cabinet Secretary: Saving is not the Most Important, but Efficiency and Rational 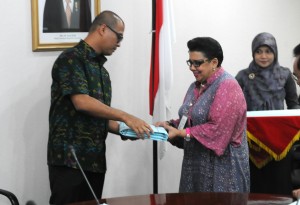 About Budget, Cabinet Secretary: Saving is not the Most Important, but Efficiency and Rational

Cabinet Secretary Andi Widjajanto straightened the definition of budget saving. In his speech in front of the officials of echelon I and II of Cabinet Secretariat on Thursday afternoon, he underlined the most important  word from the policy of President Jokowi is not the saving but the efficiency and rational.

As long as it is efficient, rational and we can explain it, it is better than saving but zero in result, Andi said it by giving an example about saving 10 billion budgets but without result.

The Cabinet Secretary admitted that he prefer to waste 2 billion but the output is 130 percents, than to save the budget but have no result.

Those four priorities of the President should be watched, we should really guard it. Please adjust the programs and budgets with those priorities, Andi Widjajanto uttered.

In that event, he also handed over the Budget Execution Document (DIPA) and the Activity Operational Guidance (POK) of the DIPA of organization unit in Cabinet Secretariat of 2015 Budget Year.

Besides the budget users, Cabinet Secretary Andi Wijayanto also handed over the DIPA to the Deputy of Administration Djadmiko as the 2015 Budget Holder.