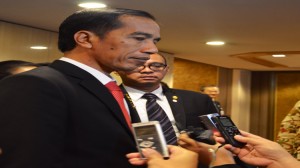 President Joko Widodo (Jokowi) provide an explanation related with his statement regarding the South China Sea that quoted by Reuters news agency, and reported by some Japanese media, including the Yomiuri, Monday (22/3).

“I need to say that Indonesia is not in the disputing parties there. We just want to encourage the Code of Conduct can be implemented, and obviously the finalization,” said President Jokowi when intercepted by journalists at the Imperial Hotel, Tokyo, Tuesday (24/3).

The president said, if it is necessary, Indonesia is ready to be a good mediator, related to the South China Sea dispute. “I just saying that,” he said.

Previously, Japanese newspaper, Yomiuri citing the Reuters on the news about the statement of President Jokowi related territorial China in the South China Sea.

“We need peace and stability in the Asia-Pacific region,” Jokowi said in interviews with the Japanese media on Sunday (22/3).

As we known, that during this time the South China Sea disputed by a number of countries, including China and some neighboring countries of Indonesia in Southeast Asia.

According to President Jokowi, political stability and security is important for economic growth. “So we support the Code of Conduct in the South China Sea, and also dialogue of China (PRC) – Japan as well as China (PRC) – ASEAN,” said Jokowi, who was visiting Japan for four days.

When asked whether there was clarification of the Government of the People’s Republic of China (PRC) related statements on the South China Sea, President Jokowi admitted nothing.

Means departure to Beijing later, whether to explain about the news? “When asked, we convey that indeed the statement just like that, and nothing else,” Jokowi said.