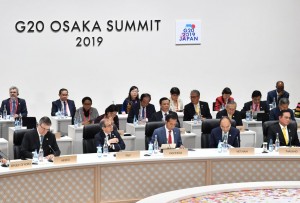 Access to education and womens empowerment are important elements to achieve the Sustainable Development Goals (SDGs) and these aspects require cooperation among related stakeholders, President Joko Jokowi Widodo has said.

The President made the statement in his address before leaders of the G20 member countries at the Third Session of G20 Summit held in Osaka, Japan, Saturday (29/6) with theme Addressing Inequalities & Realizing an Inclusive and Sustainable World.

Regarding education, the President stressed the need to adjust the current educational system, which according to him, still follows the old educational pattern. In fact, he added, in todays digital era mental patterns and interaction pattern are changing among children in the current era.

The children are now living in the era of YouTube videos, which has an average duration of 12 minutes, in the era of Instagram Video or Twitter Video which has an average duration of 6 minutes or even as short as 1 minute. In the past, they got along with their friends by cycling together, now they are getting along through video games and “Massive Multi-Player Online Games” such as Fortnite and Minecraft, said the President.

Furthermore, the womens role in the economic, political and social fields is still far from the potential, he added. In fact, President Jokowi said that women could perform better than men in the era of digitalization and globalization.

Women are more diligent, detail-oriented, patient and able to work in a team compared to men. Such characters are suitable with the era of e-commerce and technology, thus improving their participation in the business, economic, and political fields will boost national economic growth and competitiveness in the digital era, President Jokowi explained.

Therefore, the Indonesian Government, he said, will focus on developing human resources, considering the country has nearly 68.6 percent or around 181.3 million people at productive age.

To make the productive population become a demographic dividend, we need qualified and competitive human resources, the President added.

Meanwhile at the regional level, President Jokowi said that the ASEAN leaders have just adopted the ASEAN Outlook on Indo-Pacific which contains the attitude, outlook, and preparedness of ASEAN to cooperate with any parties as its contribution to maintain stability and peace as well as to create an inclusive and sustainable development.

Cooperation is clearly needed: First, to solve the problem of funding sources both from the Government and the private sector, through financial innovations such as blended finance; Second, cooperation in certification of expertise or competency standards. The more certification can be accepted regionally, the greater the benefits of vocational training and practical skills are for our workers,” President Jokowi said.
(BPMI/ES)