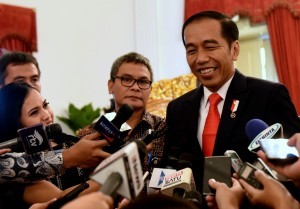 President Joko Jokowi Widodo finally commented on the controversy of acting governor from the Indonesian National Police (Polri) senior officers as it was proposed by Minister of Home Affairs Tjahjo Kumolo.

According to the President, even until now he has not received the proposal. He reminded that the appointment is not in the near future.

When I have received the names, I will answer the question., the President responded reporters at the State Palace, Jakarta, on Wednesday (31/1) afternoon.

It previouly happened and there was no problem. Many candidatures were from Indonesian National Defense Forces (TNI) and Polri, the President stated while he questioned why it is now controversial.

It is all I can say. I have not received it. I will not make any other comment, President Jokowi said. (GUN/RAH/ES) (EPI/YM/Naster)