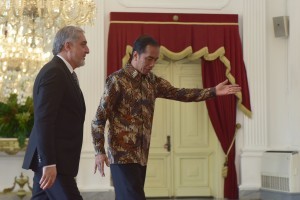 During the meeting with President Joko Jokowi Widodo on Thursday (4/10) at the Merdeka Palace, Chief Executive of Afghanistan Dr. Abdullah Abdullah expressed deepest sympathy to the victims of the earthquake and the tsunami in Central Sulawesi Province.

President Jokowi also shared stories and conditions in the disaster areas and conveyed that the Indonesian Government is working hard in the post-disaster rescue and relief efforts. The Government is also focusing on assisting the victims to recover, the President said.

According to President Jokowi, until Wednesday (3/10), the death toll from the deadly earthquake and tsunami  which hit a number of areas in Central Sulawesi province on Friday (28/9), is 1,300 people and the figure is expected to rise as many victims have not been rescued yet. The President has also ordered the evacuation team to continue the searching and evacuation process.

For the record, it was the first meeting between President Jokowi and Dr. Abdullah Abdullah the former visited Kabul, Afghanistan, early this year.