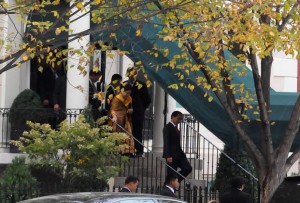 President Jokowi leaves Blair House, where he was staying during a visit in Washington DC, USA, for return to the homeland, Wednesday (28/10) morning.

After a few days of being in the United States (US) for a working visit, President Joko Widodo (Jokowi) and Lady Iriana on Tuesday (27/10) at 18:00 local time or 17:00 pm, return to their homeland, with the Indonesian Presidential Plane 1, which took off from the airport Andrew Airforce Base, Maryland.

Indonesian Presidential plane-1 carrying the President and First Lady Iriana Joko Widodo will be returned to the country via Amsterdam and Abu Dhabi by traveling for 24 hours, and is expected to arrive in the country on Thursday (29/10).

The Communication Team of President, Ari Dwipayana mentioned, it is planned that President Jokowi will go directly to the area affected by smog.

“The visit to the area affected by smog, depending on the visibility condition that allows the presidential aircraft be able to land,” Ari said in a press release Wednesday (28/10) morning.

President’s visit to the region affected by smog, Ari continued, to ensure the measures in the blackout of the land and forest fires as well as the handling of the people affected of smog, especially health services, is going well.

Previously, Monday, October 26, 2015 at 10:35 Local Time, the President Joko Widodo decided to accelerate his visit in the United States to immediately return to the homeland.

The President explained that the decision was taken after President heard the reports about the health and social impacts experienced by residents in areas affected by the smog.

For visiting  to the West Coast, the President will assign the relevant ministers. “I am assign the Minister of Communications and Information Technology, Head of BKPM, Head of the Creative Economy to continue to meet with the CEO there,” the President said. (ES)/Sy.