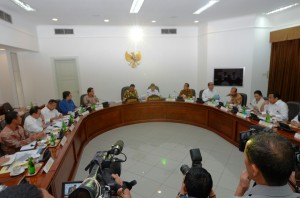 After chairing the Cabinet Limited Meeting (Ratas) that discuss of drug abuse, preparation and security within the framework of Christmas 2014 and New Year 2015, President Joko Widodo (Jokowi), accompanied by Vice President Jusuf Kalla, Wednesday (24/12) afternoon, in the office of the President, Jakarta, chairing Ratas on economy which discusses the fuel (BBM) subsidy scheme in 2015 as well as program and budget allocation in 2015.

“We all know that the world oil price is currently down. Therefore, today we will talk about the fuel (BBM) subsidy in 2015, “said President Jokowi, while providing a foreword before starting ratas.

Prior to this, there is a discourse on possibility of implementing the fixed subsidy scheme  in prices of fuel oil (BBM). Chairman of the Governance Reform on Oil and Gas, Faisal Basri, recommends to the government to use the pattern of fixed subsidy scheme on fuel prices (BBM).

According to Faisal, the Government and the Parliament during this time, hassles in discussing the revised budget when the price of Indonesia Crude Oil Price (ICP) changed. Faisal mention, budget posture disturbed if there is a change of ICP and government programs that have been budgeted by the state budget will be dormant.

The fixed subsidy is a subsidy provided by the government with a fixed value for each liter of fuel subsidy. If the fuel economical price of Rp 10 thousand and the government fixed subsidize Rp 1000, then the public should buy subsidized fuel at Rp 9000/liter.

This means that if the world oil price rise and the exchange rate of rupiah weakened, causing the economic price of fuel oil (BBM) goes up, then the fuel oil (BBM) price will go up, and vice versa.