After Revolution on Military Forces, President Request Jokowi for Continuing to Develope Our Air Force 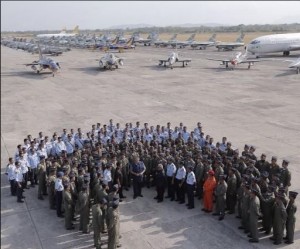 After Revolution on Military Forces, President Request Jokowi for Continuing to Develope Our Air Force

On his way to Surabaya from Jakarta on Sunday (5/10), President Susilo Bambang Yudhoyono (SBY) together with Madame Hj. Ani Yudhoyono and a number of minister visit Iswahjudi Air Forces base to give instruction to all pilots and aircraft combat crews.

In addition, President SBY also said that massive empowering military force and modernizing defense equipments revolution has been going on during his presidency. President expects in the future, Indonesian military would be taken into account.

Four years from now, it could be said that our military forces would be quite formidable to uphold sovereignty and defend territorial integrity of this nation, Republic of Indonesia, said President SBY.

Moreover, President SBY emphasizes on the importance of air force sector. This sector, TNI AU, said SBY would be the pioneer in carrying out the development of military air force and modernization of the equipments in the future. It is necessary to know that todays combat is very much determined by the air force owned.

According to President SBY, the rise of air force began to emerge in the first Gulf War of 1990. At that time, air strikes combined with the attacks from sea were quite intensive, so then aircrafts on the opposed side were destroyed on the spot, not even had time to air. Soon after that, ground operation could be quickly carried out as the opponents source of power including logistics have been destroyed. At this point the military air force become critical element, President explains.

In addition, SBY gives other example on how western countries crippling ISIS movement in Middle East which are using joint air force attacks. According to SBY, western countries and United States (US) are very careful to deploy ground forces due to the high cost, both financial and lives.

Thousands of people could die. Furthermore, impacts from ground operations could be problematic because the Parliament and the people s approval is uncertain, said the President.

President SBY hopes, Indonesian air forces would be more powerful and reliable in the future. President reminds that our territory is large enough. It has to be defended, therefore needs more aircrafts ready to combat.

We have to be prepared in every aspects. Our land is huge, even more our sea territory. There are lots that we must to defend. We ever did a loud protest on air force incidents in the east part of Indonesia. However, we do not have enough aircrafts so then we could only protest, while chasing was hard to do, nor even to cast out, SBY expresses his fury sometime ago.

We hope what we currently achieve could be continued by the next government. I have said to Mr. Jokowi as our next President, that military forces and modernization of air forces equipments are very crucial, and have to be completed, said President SBY.

President SBY believes that if the next government keeps to continue this program consistently, dignity of this nation, Indonesia, would be maintained well. So then we do not have to worry other nations would humiliate us, such as territorial infringements or even supporting the anti-state movements in Indonesia, and other threats that threaten the sovereignty of this nation, SBY explains.