After the Inauguration, KEIN has Meeting with President Jokowi 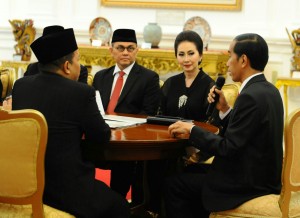 President Jokowi directly led a meeting with the National Committee for the Economy and Industry (KEIN), at the Merdeka Palace, Jakarta (20/1)(Photo:Humas/Rahmat)

Shortly after the inauguration, members of the National Committee for the Economy and Industry (KEIN) conducted a meeting with President Joko Jokowi Widodo at the Merdeka Palace, Jakarta, on Wednesday (20/1) morning.

On the occasion, members of KEIN gave a general description about the situation of the national industries and the national economy.

I actually also want to know the description because there are a lot of industries, particularly from China, Taiwan, Japan, Korea, and others, President Jokowi said, starting the discussion with  members of KEIN at the Merdeka Palace, Jakarta.

President Jokowi also asked whether industry zoning in certain areas is needed or not, for example in crude palm oil (CPO), automotive, textile, and other industries.

Although it is not a certain to lead our people there, at least with the mapping, people will start their businesses easily, the President added.

As previously reported, members of the National Committee for the Economy and Industry (KEIN)  were inaugurated by the President at the State Palace, Jakarta, on Wednesday (20/1) morning. The members are as follows: