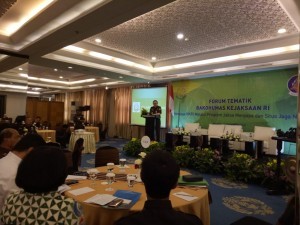 However, in law enforcement, the Attorney General Office calls on the public to change the mindset on how to reduce crime rates and improve welfare of the people.

According to Maringka, intelligence is no longer frightening; rather, it functions as a unifier, unites, creates a sense of security, and is able to change image of the Attorney General Office from the one that prosecutes and arrests people to becoming an institution able to improve public awareness.

We no longer take a defensive approach. Law enforcement is not about captures but we also invite people to be aware of the law, especially with existing programs, Maringka said.

Important menus on the site include Government Safety and Development Guard team (TP4) and the Tabur (Responding Fugitive) 31.1. program.

Through the site, according to Maringka, the public can also file reports should they find actions that can potentially harm the national unity and serve as early detection of crime through peoples reports.

“If there is no participation and information from the public, it will be difficult for us to work because we only have tens of thousands personnel all over Indonesia. With these programs, we hope we can protect and defend the integrity of the Unitary State of the Republic of Indonesia and maintain the unity, Maringka said.

Another program, Tabur 31.1, is a fugitive catching program through which the public can easily see the law and the duties of the Attorney General Office.

In the meantime, Chairman of the Bakohumas Rosarita Niken Widiastuti expressed appreciation for the Jaksa Menyapa program. The Attorney General Office has chosen to collaborate with RRI for the program to greet people because the radio station covers all regions in the country, Niken said, adding that the other programs are also excellent to be disseminated through the Jaksa Menyapa program because this is not only informative but is also an innovative activity.

With the Jaksa Menyapa program, the public will better understand main tasks and functions of the Attorney General Office and they can also raise their legal awareness, Niken added.

Also attending the event were Head of the Legal Information Center Drs. M. Rum, SH, MH., Secretary of the Deputy Attorney General for Intelligence, echelon II and III of Attorney General Office as well as representatives of the ministries/institutions public relations. (RSF/HEN/ES) (GWH/EP/Naster)