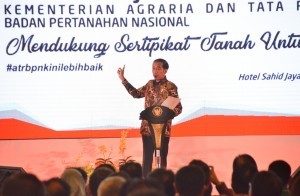 President Joko Jokowi Widodo said that Ministry of Agrarian and Spatial Planning/National Land Agency (BPN) must have same visions and spirits of providing lands for the people.

I want agrarian reforms and land redistribution program can receive our concern and attention. I want that in 2018 the Ministry and the BPN can prepare land redistribution that target lands with right-to-cultivate permits (HGU), the President said in his remarks at the opening ceremony of the 2018 National Working Meeting of the Ministry/BPN at Puri Agung Convention Hall, Sahid Jaya Hotel, Jakarta, Wednesday (10/1).

The targeted lands, the President said, are those whose HGU period have expired and their HGU rights are not extended, so they can be designated as abandoned lands and can be used as state-owned reserved lands.

State-owned reserved lands can be redistributed among the people that still face difficulties to own lands, the President said.

President Jokowi went on to say that asset redistribution is not a program to give away lands. In fact, he added, the program is aimed at bringing prosperity for underprivileged people and addressing poverty as well as reducing economic gap.

This land redistribution must be integrated with programs to strengthen the economy so the lands can be productive, such as with loans from the Smallholder Business Credit (KUR), programs from Ministry of Agriculture, programs from Ministry of Micro, Small and Medium Enterprises, or programs implemented by related state-owned enterprises. If we can do this, Im sure our Gini ratio will drop, the President said.

President Jokowi also reminded Ministry of Agrarian and Spatial Planning/National Land Agency to support national strategic projects, especially acceleration of infrastructure projects. We want to catch up with other countries in terms of the construction of toll roads, seaports, airports, and lands for power plants. We accelerate infrastructure development to reduce logistic distribution costs and to improve our national economy competitiveness, the President said.

President Jokowi also called on all personnel of the Ministry and the Agency to leave linear and monotonous mindsets. This is the change that we have to make so that we can catch up with other countries, the President said.