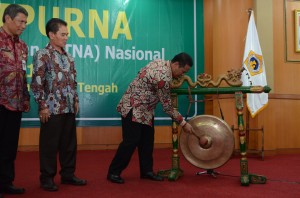 There is an increase of 4.15 million tons this year or 5.85 percent. This production indicated our rice supply is enough compared to 2014, President Joko Widodo explained in his written remarks read by Minister of Agriculture Amran Sulaiman at the opening of 2015 Plenary Meeting of National Outstanding Farmers and Fishermen Association (KTNA) and Expo in Boyolali, Central Java, on Friday (6/11).

Likewise, the production of corn, soy bean, and other staple foods is also increasing. We need to respect the farmers hard work by buying products from our farmers, President Joko Widodo said. The President instructed Bulog (National Logistics Agency) to maximally absorp the harvest of the farmers, especially rice.

Previously, the President stated that with 250 million people population, the fourth largest in the world, and 1.49 percent of population growth rate, Indonesia needs food in large amount to meet the needs of its people.

Therefore, the Government is committed to achieving food self-sufficiency in three years. Moreover, production acceleration will also be applied for other food commodities so that we can control the import.

To achieve food self-sufficiency, I already instructed Minister of Agriculture to solve the main problems, such as: 1. Irrigation that severely damaged (52 percent) in all over Indonesia; 2. Limited superior seeds; 3. Fertilizer distribution that is still not on target; 4. Inadequate agricultural tools and machinery; and 5. Limited counsellor officers, said the President.

The President reminded that agriculture development needs support from all related ministries starting from land providing, water irrigation, agricultural tools and machinery, technology and funding as well as marketing that should be conducted synergistically. It also needs support from the universities, research insitution, counsellors, KTNA, private parties, and businesspeople.

The President expected that KTNA in central Government always gives inputs in decision and policy making as well as in coordination. Meanwhile, in regional government, the KTNA should actively monitor the programs of agriculture development.

I hope all of ypu will always improve competency and professionalism in order to give the best services to all farmers in Indonesia, the President said.

The 2015 Plenary Meeting of KTNA and Expo is held from 5 to 7 November. (MMB/YM/Naster)