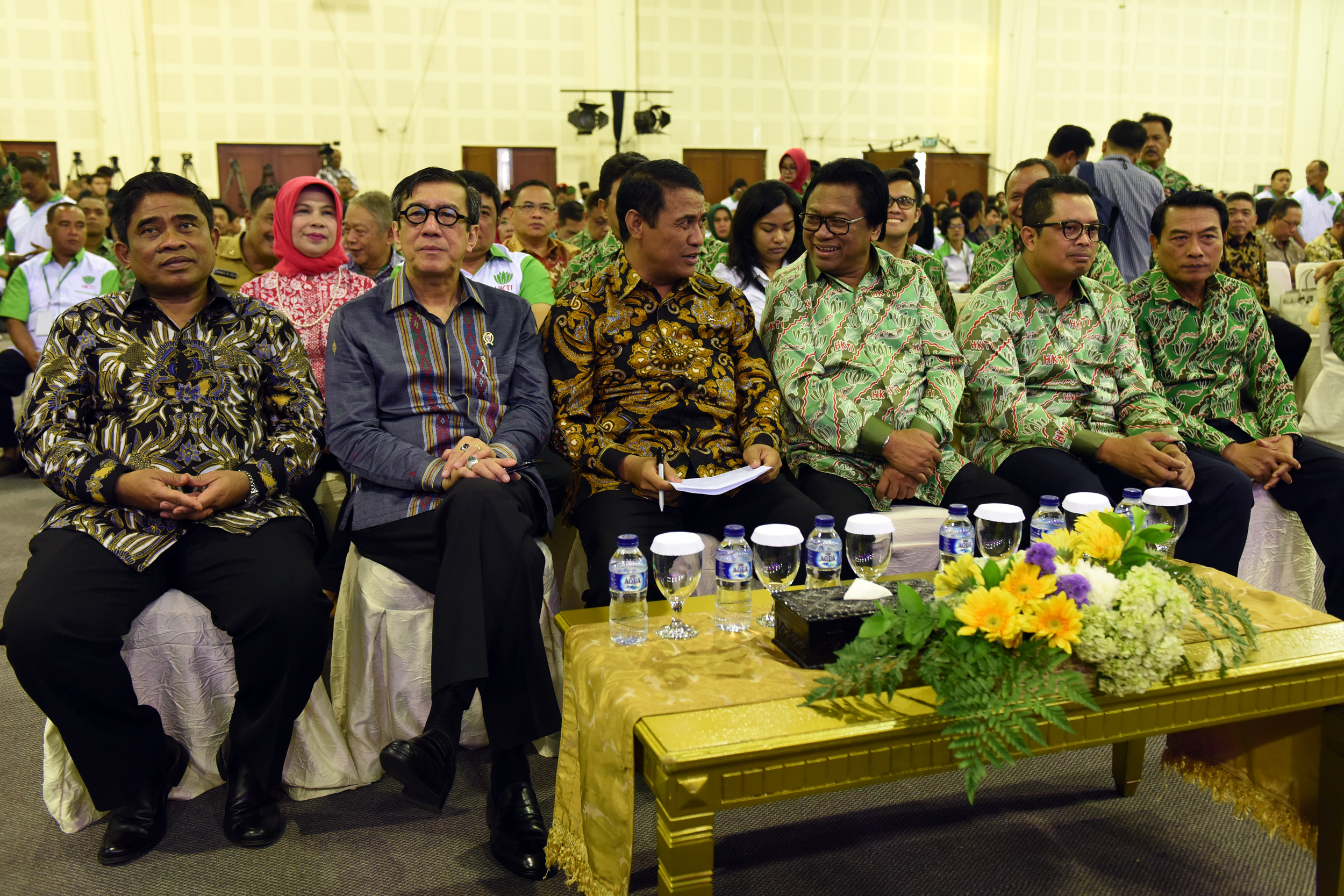 Minister of Agriculture attends a silaturahmi (amicable gathering) with the participants of the 2017 Indonesian Farmers Association (HKTI)s National Leaders Meeting on Monday (10/4), at Balai Kartini, Jakarta

Ministry of Agriculture continues to focus on increasing the production of 11 primary agricultural commodities, such as rice, corn, and soybean in order to accelerate Indonesias self-sufficiency in food.

The statement was made by the Minister of Agriculture Amran Sulaiman during a silaturahmi (amicable gathering) with the participants of the 2017 Indonesian Farmers Association (HKTI)s  National Leaders Meeting on Monday (10/4), at Expo Hall, Balai Kartini, Jakarta.

The Minister also said that there is an increasing amount of corn production. On the previous term, the amount reached 19 million tons, while at the end of 2016, the amount increased to 23.2 million tons; not to mention the import of corn, particularly from the United States and Argentina, declined by 66 percent.

Recently, the Ministry of Agriculture has developed 3 million hectares of irrigation, based on the instruction of President Joko Jokowi Widodo. The development, which was scheduled to be finished in three years, can be completed in one year. Three million hectares worth of tertiary irrigation can be done in one year, Amran Sulaiman added.

The Minister asserted that agriculture cannot be developed without technology. Therefore, the Ministry of Agriculture on behalf of the Government, is now accelerating assistance of agricultural tools through direct designation. The Minister also provides insurance to the farmers as a form of protection from the Government.

As many as 1 million hectares of agricultural areas is now covered by the insurance. In case of severe droughts and floods, the farmers will be given Rp6 million per hectare in compensation, Amran added.

The Ministry also focuses to develop border areas by managing several spots considered as the center of smuggling of agricultural commodities.

On that occasion, the HKTI has elected General (Ret.) Moeldoko, to replace Mahyudin, as the new chairman. The newly-elected chairman in his remarks said that he appreciated the Government for developing a number of infrastructures in agriculture sector, for example by developing irrigation, providing subsidy and agricultural means and infrastructures, including agricultural tools and machinery.

We, the HKTI, trully wants to be the Governments strategic partner, that is in line with the mission of the HKTI, Moeldoko added.

In the future, the HKTI is expected to be able to bridge the problem of the farmers on access to capital as well as markets, and the problems regarding branding.