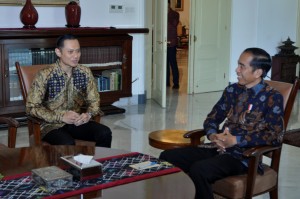 After the meeting, Agus told reporters that the meeting aims to ensure that President Jokowi and Susilo Bambang Yudhoyono could continue the established friendship and communication, especially in discussing recent national situations.

“Because Bapak Susilo Bambang Yudhoyono had to accompany Ibu Ani (read: Agus mother) who is undergoing blood cancer treatment, President Jokowi asked me to be a message-bearer,” Agus said.

Agus went on to say that, as a former president SBY has wisdom as well as certain experiences that can be shared to support the President in handling recent political, legal, and security affairs, especially after the election result announcement.

On that occasion, Agus as the Commander of the Democratic Party Joint Task Force also congratulated President Jokowi for his election victory.

“Bapak Susilo Bambang Yudhoyono has also congratulated the President via telephone. There is also a video statement released to the public. He felt relieved.  He conveyed that the spirit to maintain a positive atmosphere must be maintained by all,” Agus stated.

The party that is not satisfied with the election result, Agus added, can bring their protest in a constitutional way.

“(The constitutional way) is available. I hope that all Indonesian people can avoid any conflict that leads to unconstitutional actions,” he said.

He admitted to felt relieved as he heard Prabowo Subianto, the President’s election candidate, would take a constitutional mechanism on his objections of the election results. He also conveyed that the President has good faith and abilities to be a leader and to protect all the Indonesian people.

“That is what we hope, for a leader to be a leader for all,” Agus concluded. (GUN/OJI/ES)