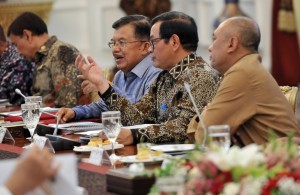 Cabinet Secretary attends the limited Cabinet Meeting on the Preparation of Christmas and New Year Celebration, at the Merdeka Palace, Monday (18/12). (Photo by: Public Relations Division/Rahmat)

Ahead of this years Christmas and New Year celebrations, President Joko Jokowi Widodo calls on related government institutions to pay attention to the issues of food price stability and food availability, transportation services, and security.

We have to give a special attention to food availability and stability of food prices, as well as the smoothness of distribution of logistics such as food commodities fuel, as well as liquefied petroleum gas (LPG), the President said in his remarks at a limited Cabinet Meeting on the Preparation of Christmas and New Year Celebration, at the Merdeka Palace, Monday (18/12).

Do bring a sense of security among the people by increasing surveillance and security in public places, such as places of worship, airports, seaports, train stations, and bus stations, the President said.

Furthermore, President Jokowi also wants the people to be involved in keeping order and security in their respective neighborhoods.