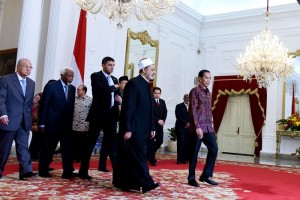 In his visit to Indonesia, Prof. Dr. Ahmed Muhammad Ahmed el-Tayeb, the current Grand Imam of al-Azhar was welcomed by President Joko Jokowi Widodo on Monday (22/2) at the Merdeka Palace.

Commenting on the visit, Deputy Minister of Foreign Affairs Abdurrahman Mohammad Fachir said that the visit of the Grand Imam is the first time since the last al-Azhar Grand Imam visited Indonesia 15 years ago.

President Jokowi extended his gratitude for the contributions given by al-Azhar University so far in educating and sharing knowledge to Indonesian students. Al-Azhar University is also a university that upholds moderate Islam and where Indonesia also uphold tolerance,  Fachir said in his press release on Monday (22/2).

Fachir also said that during the meeting, President Jokowi conveyed Indonesias contribution to al-Azhar University in the form of 4 dormitories that were launched recently and it is expected that the dormitories would not only accommodate Indonesian students but also students from Egypt and other countries.

In the meantime, Special Envoy to the Middle East and the Organization of Islamic Cooperation (OIC) Alwi Shihab said that the President especially hopes that the Grand Imam could give enlighten to Muslims in Indonesia during the visit.

We also hope that al-Azhar University can continue to guide Indonesian students in Egypt to spread the understanding of moderate Islam, Islam that is far from extremism, and Islam that is rahmatan lilalamin (blessing for the universe), Alwi added.

Alwi also said that during the meeting, President Jokowi extended his gratitude for the support given by al-Azhar University, not only in the form of scholarships given to Indonesian students in Egypt, but also for Islamic clerics that are sent to Indonesia every year.

This year, there are 30 Islamic clerics that are sent to give education to Muslims in Indonesia. I suppose the meeting was warm and brought benefits, Alwi added.

The delegates that also joined the Grand Imam in the meeting with President Jokowi are among others:

During the meeting, President Jokowi was accompanied by Minister of State Secretary Pratikno, Minister of Religious Affairs Lukman Hakim Syaifuddin and Deputy Minister of Foreign Affairs AM. Fachri. (FID/OJI/ES) (EP/YM/Naster)