All Indonesian Citizens Must Defend their Country 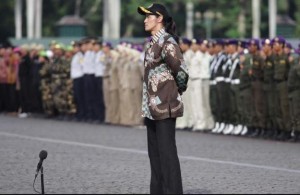 All Indonesian Citizens Must Defend their Country

Concerning major challenges and threats that must be encountered by Indonesia at the moment, President Joko Widodo thought that this is a call for all of us to defend our country.

All Indonesian citizens must have the intention and move to defend their country according to their fields of devotion, the President said while mentioning that the call to defend the country can be carried out by a teacher, a midwife, a health worker, a farmer, a labor, a professional, a civil servant, and other professions.

In his written remarks on the 2015 Hari Bela Negara (State Defense Day) that was commemorated on Saturday (19/12), President Joko Widodo affirmed that defending the country can be carried out through the peoples fields of devotion.

Defending the country can also be done through political diplomacy, economic independence enhancement, and culture security development, the President said.

The doctors, midwives, and other health workers enthusiastically respond to the call to defend the country by providing health services up to remote areas. Anti corruption activists are never tired to fight in order to free the country from corruption. Likewise, the struggle against drugs is a real action to save the young generations, the President said.

In the Presidents view, what have been done by the teachers, farmers, doctors, armies, and other professions are the real embodiment of their love to the motherland. They are willing to sacrifice for the nation and country; even it is beyond their obligation.

We must appreciate that spirit. Our duty is to ensure that their flame of spirit is keep burning and the young generations will continue this effort, the President said.

The President realized that the consciousness to defend the country is not growing by itself. It has to be imparted since early age through civic education. Therefore, the President encourages to motivating the children to love their country, their motherland so they are proud to be part of Indonesia.

State-defense values must be imparted through creative and innovative ways as well as adaptive with the times, the President said while adding we are in information technology advancement era that requires us to use the latest ways.

Therefore, young people must be given a space to express their love to the country. By doing this, I am sure they will materialize the spirit to defend the country through creative ways, the President said.

The President emphasized that the duty to defend the country is hard because the challenges are difficult. However, he is sure that through the spirit of solidarity, unity, hard work and mutual cooperation, we are able to bring Indonesia to be a sovereign and independent country. In addition, the people of Indonesia will have a good personality.(ES)(MMB/YM/Naster)