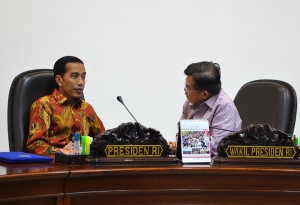 President Jokowi and Vice President Jusuf Kalla to discuss before Ratas on port development in Entikong, at the President’s office, Jakarta, Tuesday (7/7)

After chairing a limited cabinet meeting on acceleration of social assistance to micro, small, and medium enterprises (SMEs), at the Presidential Office, Jakarta, Tuesday (7/7) afternoon, President Joko Widodo (Jokowi), accompanied by Vice President Jusuf Kalla directly lead the limited meeting to discuss the development of the general cargo terminal in Entikong, the border area between RI – Malaysia, in West Kalimantan.

In his preface President Jokowi conveys, when visiting the border checkpoint in Entikong, last January, he saw a very large economic opportunity to serve export and import activities.

“But we do not use these opportunities as well,” President Jokowi said.

President compared with conditions in Epedu, region of Sarawak, Malaysia, which is designated as an international land ports that engaged in the export and import of goods by the Malaysian government.

Therefore, President Jokowi hopes there is an integration among all ministries, because this year in the border region of Indonesia will be built, and is expected that all coordinate with each other so that the border is expected to be used up by people who could also serve export and import.

“We also expect from the National Police to eradicate illegal activities. It also could be done in addition to the economic opportunities that exports and imports,” Jokowi said.

According to the President, the government has allocated more than Rp 1 trillion, mainly to improve the physical of Entikong cross-border in West Kalimantan.