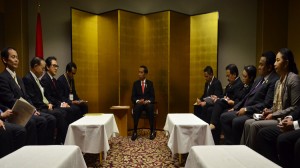 On the third day of his official visit to Japan, Tuesday (24/3), President Joko Widodo (Jokowi) is scheduled to hold a series of meetings with Japanese business community.

On Tuesday (24/3) morning at 09:00 local time, President Jokowi already started meeting with the entrepreneurs who are members of the Japan External Trade Organization (JETRO), at Hotel New Otani, Tokyo.

During the meeting, Chairman of JETRO Hiroyuki Ishige submits a report on the implementation of the Business Forum and the activities of JETRO cooperation with Indonesia.

As has been reported previously, the Government of Indonesia, represented by the Minister of Trade and Chairman of BKPM Rahmat Gobel Sibarani Franky has signed a Memorandum of Understanding in the field of trade and investment with the Chairman of JETRO.

After meeting with the entrepreneurs who are members of JETRO, President Jokowi and his entourage on Tuesday (24/3) noon is scheduled will be treated to lunch by the Keidanren (Japan Business Federation) and the Japanese Chamber of Commerce.

In the afternoon, President Jokowi will carry out a personal meeting with businessmen from Suzuki, J Power, IHI Corp., JICA, IX NEO, and JBIC.

In the meeting, the Suzuki will deliver the development investment plan in Indonesia amounted to 1 billion US dollars, J Power on the implementation of the power plant in Central Java, and IHI Corp. reported a planned expansion of the shipping industry as well as machinery industry.

While with JICA discuss regarding the development of bilateral cooperation, with Neo IX regarding cooperation with Pertamina plans in order to update the capacity of the wells in East Kalimantan, and JBIC about the plan of funding for some infrastructure and energy projects. (Humas Setkab/ES)