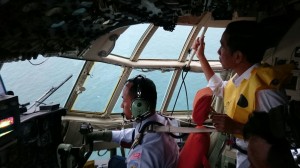 In the review to the scene from Hercules aircraft, President Jokowi other than looked directly at the crash site, he also makes radio contact with the crew of KRI Bung Tomo who was at the crash site of AirAsia QZ8501 for evacuation.

The Hercules aircraft C-130 carrying the President not landed in Pangkalan Bun, but directly proceed to Juanda Airport, Surabaya, to meet the families of passengers and crew of AirAsia QZ8501.

Accompanying President Jokowi in this visit is the Cabinet Secretary Andi Wijayanto.

President Jokowi contacts with the crew KRI Bung Tomo, at the location of casualty evacuation of AirAsia QZ8501, in Pangkalan Bun, Tuesday (30/12).

President Jokowi said, while flying over the crash site, he saw there were three (3) KRI at the scene, all leading to the target location.

“I’ve ordered to Basarnas to conduct a joint operation to search for both the plane and passengers as well as the the entire crew,” said the President that accompanied by the Governor of East Java, Soekarwo.

The President said that he has instructed to focus on the execution of evacuation of passengers and crew members first. “We will focus on the evacuation as soon as possible,” said Jokowi answering reporters’ questions.

According to the President, at the location of a suspected crash site of AirAsia QZ8501, a foggy location, and very large waves, this estimated up to 2-3 meters.

On that occasion, President Jokowi also expressed thanks and high appreciation to Basarnas, Indonesian Military (TNI), Indonesian Police (Polri), to all volunteers and fishermen for their support in order to search the plane and entire passengers as well as crew.

“Of course I would like to thank also to friendly countries which have helped in the search, from Singapore, Malaysia, Australia,” he concluded. (Humas Setkab/ES)