Although Have No Enemies, President SBY Ask TNI Should Stay Alert 24 Hours 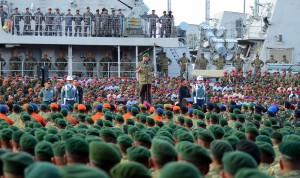 Although Have No Enemies, President SBY Ask TNI Should Stay Alert 24 Hours

Presiden Susilo Bambang Yudhoyono (SBY) as the Highest Commando (Pangti) of Indonesian Army (TNI) asserts that even though Indonesia now has no opponents due to free and active politics pursued by the government, no enemies but millions of friends, still the army have to be ready 24 hours a day.

TNI has to be ready 24 hours to carry out the task of emergency response. That is also military operation besides war. Also task of TNI is dealing with terrorism, and giving support to state police whenever needed in dealing with any movements that would threatening public safety, said President SBY in his instruction to 23.000 soldiers at the Darmaga Madura (dockland)  Command Headquarters in Eastern Region of The Republic of Indonesia (Armatim) in Surabaya, East Java, on Monday (6/10).

In the event that was also attended by Madame Hj. Any Yudhoyono and Vice President Boediono, The President asserts that threats could be from anytime including terrorism and domestic threats. Therefore, President SBY asks all soldiers to always be prepared.

According to President SBY, besides military tasks, TNI also has to fulfill other tasks such as keep the peace. This is the reason why thousands of our soldiers are sent abroad to do international duty together with soldiers from other countries in each year. The involvement of TNI in international activities to keep the world peace could be done because our state situation is in peace.

Aceh is no longer in war, security in Papua is in control, communal conflicts in Poso has ended, as well as in North Maluku, Ambon, and Kalimantan. After completing domestic task, it is necessary to have international experiences. Therefore, increase our contributions in international duties, said President SBY.

In order to complete these tasks, the profile of our TNI has to be improved. Capabilities of the soldiers through trainings and alertness have to be improved, besides improving the military equipments and logistics, as well as infrastructures.
All of these are for fulfilling tasks and do not forget that soldiers are also human. They have family and also need to have better welfare, said SBY.

On the occasion which is related to commemoration of 69th TNI Day, President SBY explains that TNI would present a report of their achievements these 10 years to the people of Indonesia, especially during under his leadership as Pangti of TNI. President is sure that the people would be proud of the achievements of TNI, Insya Allah.

According to President SBY, at the peak event of celebration of TNI Day, Tuesday (7/10), the sky above Darmaga Madura would turns to dark due to more than 200 combat aircrafts are on air. Those are from Air Forces, Navy, Army, both fixed and rotary wing.

I thought tomorrow would be the first in our history after Independence Day that our 200 aircrafts and more are on the air, coloring the sky in Surabaya. For that, we grateful to the God, said the Head of State.

In addition, President SBY said there would be dozens of battle ships are sailing to guard and defend our territory. Besides mind-battle, parade of tanks, middle and far rank of artillery would also be shown. Previously, President SBY signs monument of the launches of Private University become State University and First Cover of TNI Stamp series.